I is for inhalants

"I get high in the evening sniffing pots of glue."

Inhalant use, especially glue sniffing, was widely associated with the late-1970s punk music youth subculture. Whilst the Rocketman himself may not qualify a hard-core, nihilistic, two-fingers up to society figure in the mould of the Sex Pistols, he still tries to capture the zeitgeist of the times. It was a world where recession and the threat of nuclear war were ever present realities.

Like the punk sub-culture itself, glue sniffing began to be most strongly associated with younger users and those on the margins of mainstream society. A 1995 report by the National Institute on Drug Abuse, argued that most serious inhalant use occurred among homeless children and teens who "... live on the streets completely without family ties”

Over the years many products have been inhaled or ‘huffed’ by humans to get some kind of a ‘high’. It was commonly referred to in the past as ‘glue sniffing’, but due to the vast range of substances that can be used in this way , apart from glue, we will stick to using the term ‘inhalants’.

Inhalants are usually household or industrial chemicals whose volatile vapours or pressurised gases can be concentrated and breathed in via the nose or mouth to produce the effect of intoxication (or “getting high”). A plastic bag held over the mouth may heighten the effect. Some are inhaled at room temperature such as petrol, lighter fluids, acetone (used in nail polish remover) or toluene (paint thinners) . Others are inhaled directly from a pressurised container containing a gas such as nitrous oxide, butane or propane.

Many chlorofluorocarbons may similarly be misused when used in aerosols as propellants, such as deodorants, hairsprays, or air freshners.

Classrooms up to the 1990’s were often awash with solvent based products such as Tipp-ex (other brands were available), craft glues and marker pens, usually hoarded by the teacher. Most of these products were later re-engineered to remove the problematic ingredients after public concern was raised following a handful of deaths and worries about their possible carcinogenic properties.

The effects of inhalants are often reported to be an alcohol-like intoxication combined with an intense euphoria and sometimes vivid hallucinations. The particular substance involved and the strength of the dose may alter the balance between these effects.

In the short term, many users experience headaches, nausea, vomiting, hearing loss, slurred speech, loss of motor coordination, and wheezing. Another danger is freezing the throat. When a gas that was stored under high pressure is released, it cools abruptly and can cause frostbite if it is inhaled directly from the container. As with many other drugs, users may also injure themselves due to loss of coordination or impaired judgment, especially if they attempt to drive. Suffocation from the use of plastic bags is another possibility.

The short term side effects can be even more serious, with some users dying from a lack of oxygen, pneumonia or heart failure. Nowadays it is usually referred to as Sudden Sniffing Death Syndrome (or ‘SSDS’). Statistics on deaths caused by inhalant abuse are difficult to determine. It may be severely under-reported as a death is often attributed to a discrete event such as a stroke or a heart attack, even if the event happened because of inhalant abuse.

In Ireland the figures are collected within the ‘other’ category in the National Drugs-Related Death Index (NDRIC). The last published figure of 19 deaths in 2017 would also include herbicides, insecticides and other chemicals. As a comparison the UK regularly reports more than 60 deaths a years specifically related to what it terms ‘volatile substances’. The main item within those figures is invariably the misuse of butane gas. When butane is sprayed directly into the throat, the jet of fluid can cool rapidly to ?20 °C. Four-fifths of the deaths there are usually males, with particular hot-spots in Scotland and the North-East of England.

Statistically deaths from respiratory depression are more likely than from the intravenous use of opiates such as heroin. Most of these deaths will occur from complications related to excessive sedation and vomiting. Many can be prevented if individuals are resuscitated quickly when they stop breathing and their airways cleared if they are vomiting.

In the longer term with prolonged use a characteristic "glue sniffer's rash" around the nose and mouth is sometimes seen. Inhalant use is also likely to result in serious harm to the major organs such as the brain, heart, kidneys and liver. Pregnant women may also harm their unborn child, with abnormalities similar to foetal alcohol syndrome (FAS) being seen.

As concerns grew during the 1980’s about the use of a range of inhalants moves began to be made to restrict sales of glues to younger people. Although age controls could be brought in relatively easily an alternative approach was required when a product (of combination of products) was not specifically named under age controls.

In 1983 a key test case came up in the High court of Justiciary in Scotland. Two Glaswegian shopkeepers ended up in jail for three years for selling ‘glue sniffing kits’ to at least eighteen different children under the age of 16. They had sold a petroleum based glue, Evostick, in a plastic bag. The argument centered on whether the shopkeepers supplying materials that were otherwise completely legal did so in the knowledge that they would be used for self-harm and therefore contrary to common law. The high court took the view that they knew perfectly well what they were doing and it was just the same, under common law, as actually administering a dangerous substance to a child.

Other countries, such as Ireland, followed suit with the creation of new laws. Section 74 of the Child Care Act (1991) stated: “where a shopkeeper sells a substance, in particular glue, likely to be inhaled to cause intoxication, to a minor, he/she can, on conviction, be fined or imprisoned for up to twelve months.”

Some legal experts think that the warning “Not for human consumption” put on some New Psychoactive substances (NPS) similarly is, in principle, no defence in law.

Particular inhalants may become a significant problem for some groups within specific communities, especially when those communities are young and marginalised. For example, the practice of sniffing petrol fumes led to over 100 deaths during the 1980’s and 90’s amongst teenage boys in Australian aboriginal communities. Many saw the lack of government response as uncaring and even reprehensible, although they did subsidise the sale of ‘Opal fuel’ that was supposed to be ‘non-sniffable’. 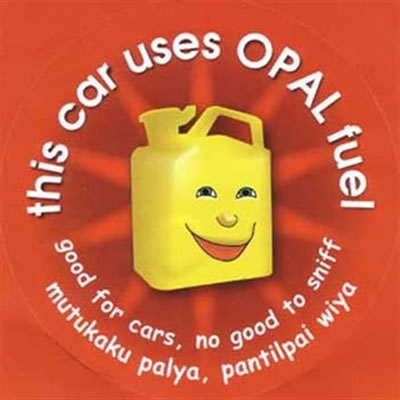 Unfortunately it also led to the smuggling of ‘normal’ petrol and some petrol sniffers migrating to the probably even more dangerous practice of sniffing glues or using other drugs. Some claimed they had found a way of filtering the petrol through styrofoam (for example a coffee cup) to make is sniffable again. The manufacturer of the petrol claimed that this was just not possible. A more successful approach was led by Aboriginal elder Peggy Nampijinpa Brown and other elders from the community. Funded by the mining companies, they took the peer pressure out of sniffing by taking the ring-leaders and chronic sniffers into the bush for a month to give “bodies and brains” time away from petrol.

In Africa meanwhile, Jenkem, an inhalant and hallucinogen created from fermented human waste was causing concern. Popular among Zambian street children Jenkem was reportedly created by collecting human feces and urine in a bucket. After fermenting in the sun it could be inhaled to create both a high and intense hallucinations. The hallucinations were probably due to a lack of oxygen going to the brain. The use of Jenkum was also widely reported in 2007 as happening in many American High schools. The media-driven moral panic reached fever pitch when an intelligence bulletin issued by the sheriff of Collier County, Florida was leaked to the press. The story was taken up across the county by local news stations, in turn popularising the term ‘Butt-hash’. Later it was seen as a classic example of ‘fake news’, almost certainly the odd result of a hoax based on faulty internet research. The ‘Smoking Gun’ website described the Collier County alert as "may be full of shit”.

In recent years concerns over inhalants have centered on Nitrous oxide. Also known as ‘laughing gas’. It has been used for many years as an anesthetic, especially in dentistry and childbirth. It’s also commonly used in the catering industry to power whipped cream dispensers. When added to a balloon it can be inhaled to give a very brief but intense high. It was estimated in 2014 that up to half a million young people in the UK had used the product. Reports regularly appear of town centres and festival sites littered with the discarded canisters. Due to its legitimate uses possession remains legal even if, as we have seen with glues, the selling of the product (when it is going to be used for recreational purposes) has been criminalised. Deaths are thankfully quite rare, averaging one per year in the UK over the past 40 years, although the US regularly counts around 15 deaths per year.

Users of inhalants may claim that the hallucinations they can induce allows them to enter a ‘parallel reality’. A salutary tale from the 19th century is told by the philosopher William James who described a man who claimed that whenever he used laughing gas (nitrous oxide) he knew the secret of the universe. After many attempts he finally managed to scribble it down before the vision faded. After he had returned to normal he read the note he had written. It read: “A smell of petroleum prevails throughout.